As I tilted back another cold beer, I wondered why the hogs were not cooperating. No hogs were being seen, no one had even heard a hog. Where the hell were the hogs? As I pondered, a new thought crept into my mind and kept growing until it became clear.  I was surrounded by the WORST HOG HUNTERS EVER!
My God, those Minnesota guys idea of getting a hog was pulling them up through a hole in the ice. Our cook was drunk, and those Memphis guys eyes were so bloodshot they couldn't see. The guys from the coast came to play golf, and the rest of them were sleeping in. This is no way to run a railroad or a hog camp.
They finally managed to get 4 on Saturday night by creeping around in the dark with a night vision scope and wouldn't have done that if Erin had not been in charge of the bumbling stampede of misfits. Anyway Congratulations! 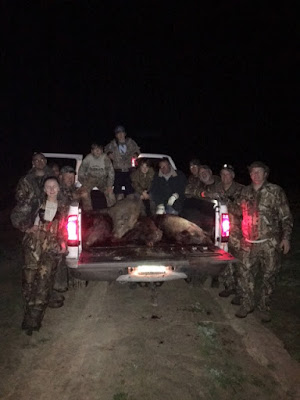 Posted by Editor at 9:19 AM No comments: