The Curse of Count Buckula 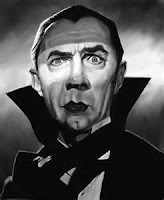 This is it, the last weekend of the deer season. We are all headed (once again) to the famous Christmas Place to give it one more try to get a giant buck. Everyone has had a great year and are not to worried about getting a deer, everyone but Vlad Paul the Impaler.
Paul aka Count Buckula has a thirst for more deer blood and is in a frenzy to get one more buck before the season is over. He is already claiming every stand on the property and swears he will be in a stand by Friday afternoon before any of us get there. Warning: Stay out of his way while the blood thirst is upon him, and to the deer- RUN FOR YOUR LIVES!
Posted by Editor at 9:55 AM No comments:

This past weekend, Marian Love came to hunt with us. She is well known from her great blog at Marian's Hunting Stories. She is a great friend, prolific blogger and very good photographer. She was also a real delight to hunt with. She is recovering from knee surgery which made it hard to get around but she was game to get after the deer. The only deer (doe) was taken by Mark the Mailrider but we all had a very fun weekend. 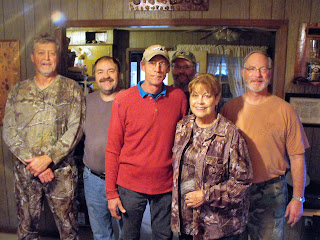 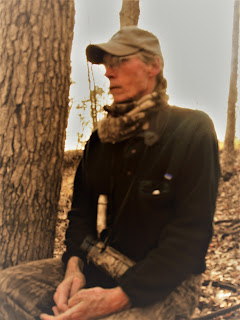 Quacking for Deer with your friendly neighborhood Deer Blogger 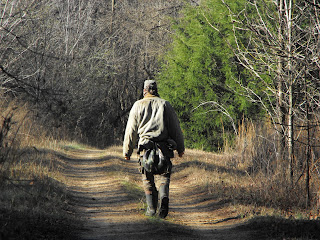 heading for the buggy after a beautiful morning hunt
Posted by Editor at 9:36 AM 1 comment:

Surviving The Pit of Despair

First of all, Burney got his buck. Second, OMG!, it was in the deepest darkest, most desolate crater on the whole property. Burney had taken a buck there about 10 years ago and after we got it out, everyone pledged never to get near that Pit of Despair again.
While loading my deer, Burney showed up and said he had a deer, then told me where it was. OMG! I almost had another heart attack. But gamely, Mark, Burney, Crosby 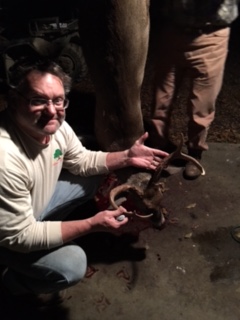 and I went after it. We had two flashlights, a smoking 4-wheeler and 50 feet of rope.
We followed a narrow trail downward until it became so narrow you had to stand sideways to stay on it with 100 foot drops on either side, ( a mountain goat would not be stupid enough to go down it, but we did) then at the end rappelled down into a beautiful little valley with a flowing stream. Perfect to get a deer. Then I looked up at the mountain above us to drag the deer out. OMG!  Move the deer 5 feet, it slid back 3. We had to get 3/4 the way up before the rope would reach the maximum limit that the 4-wheeler was able to back down the trail. Finally, finally we hooked on and got the deer out. I will never go back into that hateful Pit of Despair again!
Posted by Editor at 11:15 AM No comments:

This really nice 9 point showed up on the bank of the lake on Saturday afternoon  and I made a perfect cast to catch him with my .270.  He weighed 180 lbs and I almost had a heart attack getting him in the boat! 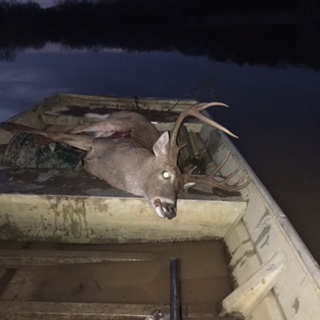 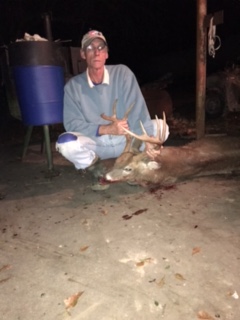 Another Buck Bites The Dust 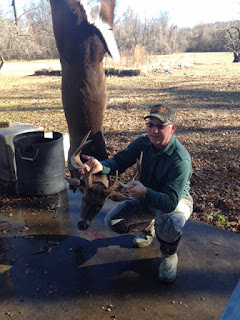 Paul Howell likes to do his killing before breakfast, and soon after we got on our stands Friday morning, the air was filled with the sound of flying lead. The happy killer blasted the unsuspecting deer on the Box field and he was back at camp by 8:30 with the big buck.
This time the 10 point ? weighed in at a reasonable 200 lbs with a nice heavy rack. A very nice deer.
Don't worry he is back in the woods trying to get his limit of 3 and I am sure we will be hearing from him again

Posted by Editor at 4:20 PM No comments: