Mark Stewart, famed Hogologist, scored his 2nd big buck of the year this weekend hunting on the ground up at the 72 acre stand. The 205 lb. 10 point was chasing does in the big field when
Mark blasted him at point blank range. Congrats on a great season! 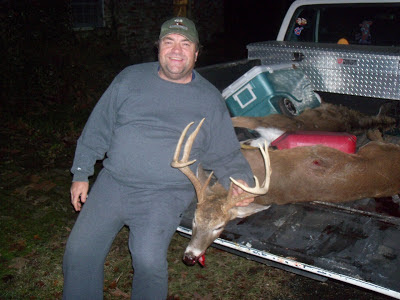 "Should old Deer Hunts be forgot,
and n'er brought to mind? 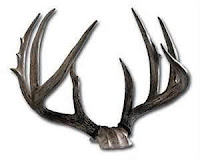 Should old Deerhunters be forgot
in days of Auld Lang syne.

For Auld Lang Syne, and deer
for Old Great Times!

We'll have a cup of kindness yet
for hunters of Auld Lang Syne!
Posted by Editor at 9:37 AM No comments:

Burney has been AWOL for awhile now, but finally made a quick trip down to the Christmas Place on Thursday afternoon. the wind was right swo he headed up to the 72 acre stand. BLAM! he shot a hog going in. BLAM! he shot a hog under his stand. Hogs were laying all around him so 30minutes later he decided to walk out and a big buck was standing in the edge of the woods looking at him. BLAM! He managed to get 2 hogs, a really nice 8-point and it added up to over 450 lbs of meat on the table. WOW! Congrats, Burney! 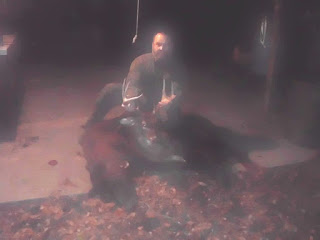 Posted by Editor at 9:31 AM No comments:

There'll be no Christmas at Deer Camp this year.
Those fools keep shooting at my deer!
And you would not believe the horrid smell,
those hunters put deer urine on Everywhere!


I'm not coming, no, no indeed
Even though I really know what they need.
They all want a change of luck
so they can get that great big buck


There'll be no Christmas at Deer Camp this year
I ride by there in deadly fear!
And you would not believe the hell
of interrupting a midnight card game there


I'm not coming, someone will draw a bead,
Even though I have exactly what they need
They all need a change of luck
to get that great big 10 point buck.


There'll be no Christmas at Deer Camp this year
Those fools keep shooting at my deer!
Well, Maybe I'll bring just a little luck
so they can finally get that trophy buck.

To the best of my knowledge this is what happened. There was a terrible storm brewing just before daylight as everyone headed out to their stands. A low rumbling in the sky was growing and Trent decided he would hunt the Point Stand in case the storm hit and he could get back to camp quickly.
At daylight he was safe on his stand as the big clouds rolled above him and then the wind went still.
Everything was deathly quiet and he could hear the quick steps of an animal trotting toward him through the brush. He knew it was a big buck and raised his rifle. A big, black hog came out and crossed in front of him. "Hell with this" he thought and found the hog in his scope.
Everything went white as a huge bolt of lightning cut the sky and hit. He jerked away as he pulled the trigger and the sound of the shot was lost in the loud KA-BOOM of the lightning strike. When he could see again the hog lay dead about 50 yards from him. He jumped out of the metal tripod lightning rod he was sitting in and came back to camp. We got the hog and Trent feels like he hit him solid but all I found was a big scorched mark on his side. 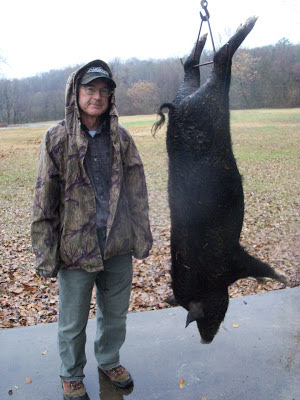 Bad weather and rain covered the famous christmas Place and the hordes of spectators there to watch the Antler Bowl. It was a muddy affair with the Bucks outwitting the Marauders as several good bucks escaped and ran up the score. The only saving grace was when Rex Howell, your friendly neighborhood blogger, blasted this nice 10 point on the South Cornfield stand. They shoot 10 points, don't they? Final score 34-10 Bucks win. 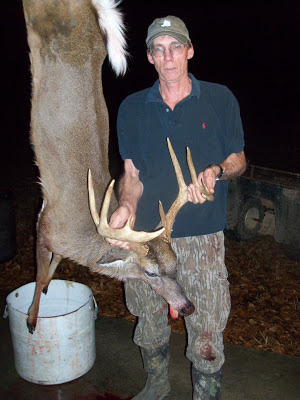 This weekend the world renowned Antler Bowl will be happening at the famous Christmas Place. The Marauders are very strong this year and have already put a bullet in at least 6 big bucks and have been waiting for the Still-Season and the Antler Bowl to start so they can get a few of those big wall-hanger bucks on the pole.

Coach Thunderhoof of the Bucks says that his team is not a-feared! The big bucks have been laying low and plan to run rampant over the pesky humans this weekend and give them a thrashing they will never forget. They have some huge running razor backs that have transferred over from Bacon Flats to smash the line and create gaps for the big bucks to get to the goal line. Should be a bruiser of a weekend!
Posted by Editor at 12:07 PM No comments:

Mark is about to drive me crazy. Here are some more pics of his damn hog weekend. 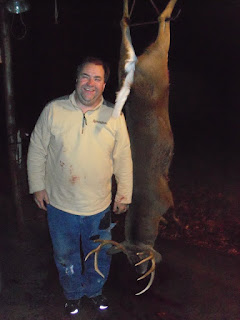 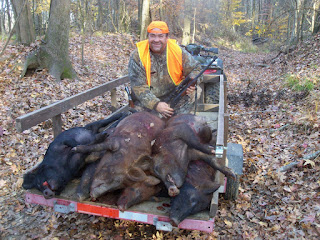 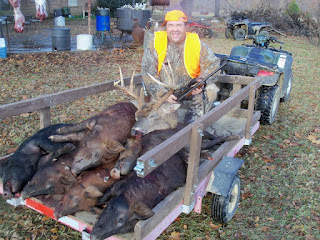 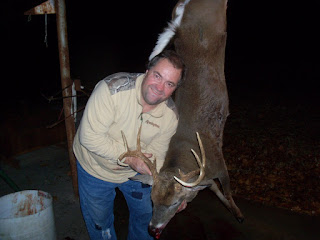 so, I am headed down to the famous Christmas Place this weekend and the phone rings. Mark says "Hey, are you bringing a camera?" (oh, crap!) :Uhhh, yes???" He says "Good, you can take a picture of this big mule I just got at the North cornfield!
This started a wild weekend that Mark will talk and talk and talk about forever. Jeez!
The big 8-point weighed 190 lbs. and everyone was fired up for Saturday morning to arrive.
Paul came in with Michael and Tim Crosby that night and later Spencer showed up with two buddies named Joe and Peachy. Let me tell you, those two kids were stone cold killers! 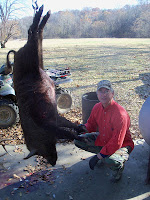 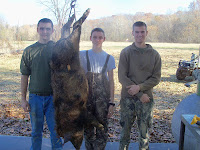 Saturday morning I took Peachy and hunted the Dove Field and he took a big hog off in the swamp while Joe blasted another one that got away. Paul also got a big 170 lb. boar. Hogs were running everywhere. 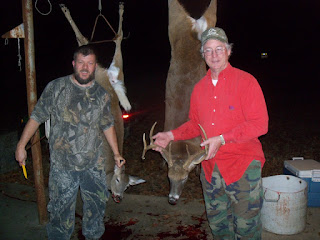 That afternoon Tim got a doe up the creek and Paul shot a nice buck over the mountain. Peachy and Joe brought in another hog. Pauls' buck was another 8-point that weighed 200 lbs. then Sunday morning the action really started!
No one did any good that morning, mainly because of the steady BOOM, BOOM of Marks rifle ringing across the property. Mark took 6 hogs at one time, he ran out of bullets and got the last one with his pistol! The woods over there are still ringed in smoke and the road leading in is now known as the road of death and the stand has been renamed Pork Chop Hill! 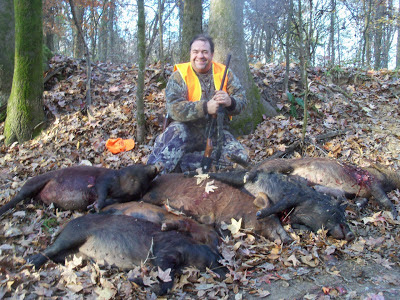