Marian and Bob came up last week and hunted with us. She got this nice doe at her favorite stand, Arrowhead. 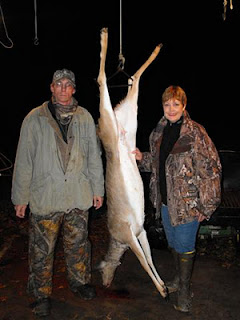 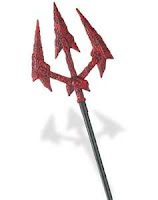 We made it through Christmas Day, but I wanted to let you know what I got my brothers for Christmas.
I got my evil brother (Paul) the usual, a new pitchfork. After a year, his is always bent and twisted from being held in his evil hands. He is at camp right now hunting. I am sure he has 3 or 4 deer hanging off his new pitchfork by now. 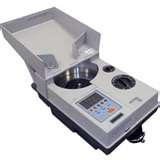 My other evil brother (Trent)got a new coin counter. His is worn out.
Pennies, nickels, dimes, whatever he can steal. Damn lawyers!
Posted by Editor at 10:14 AM 3 comments:

Off To See Ebenezer

Spencer and I are off to see his Uncle Ebenezer (Trent)for Christmas dinner. I wonder how much it is going to cost? I am also wondering whether we are going to have to listen to those damn ghost of his rattling chains and moaning all through dinner.
Christmas movies and eggnog later.
Merry Christmas everyone!
Posted by Editor at 5:43 PM 1 comment:

It's A Weird Life

I had seen enough. bills, bills, bills covering me and Bobby and his pet squirrel had lost the deposit just as the auditors got here. I was doomed.
I drove out to the Yocona Bridge screamed "Good Bye Cruel World" and jumped in. Unfortunately the water was only two feet deep. It almost killed me! 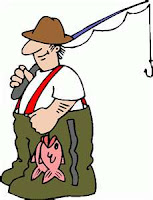 When I came up an old fisherman pulled me in his boat, he looked a lot like GuyK and asked me what was the problem. I told him how hard it was and that I wished I had never been born. He said "You got your wish" just as he pulled in an 8 lb stripe. I crawled out on the bank, got in my car and drove back to Water Valley. The changes I saw were a nightmare.
My evil brother Paul was president of the United States which was horrible in itself. He had declared war on the Christmas Place in an effort to kill Thunderhoof once and for all.
Trent was the mayor of Water Valley, uh check that, Trentville. He controlled everything and taxed every hunter per inch of rack taken.
Dad was in jail for harboring a fugitive (Thunderhoof) and raising an illegal garden. Bobby was in the old folks home with Uncle Billy. Denise had moved away and was married to Brad Pitt. SOB! Camo was a famous star in Hollywood making movies "MissionDog Impossible" and was known as Cam Cruise. Burney was the editor of some magazine called PlayDeer. I was afraid to open it. 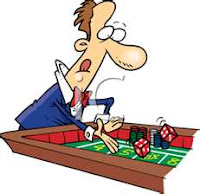 I ran down to my broken down Real Estate office. It was a casino. Trent's Gambling House. I ran to my house. Trent's B&B. Yikes! I drove out to the lake and met my mysterious fisherman. "Change me back" I cried. He said "Sorry, the fall really did kill you, welcome to Hell! I screamed and screamed until I woke up and found myself in my chair at that broken down miserable Real Estate office. Thank God and Merry Christmas to you all!
Posted by Editor at 10:15 AM 8 comments: 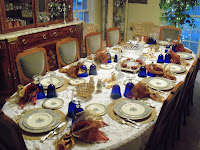 The party was a major success and no one was killed. We ate on the fine china and drank from crystal glasses (not jelly jars) and enjoyed a great night of friendship, fun, good food and conversation. Everything was relaxed and enjoyable. The house looked great and my butler dog acted very well. I thank all of you that came and hope to have another sometime in the next 40 years.
Posted by Editor at 9:57 AM 4 comments:

Camo is ready for Christmas! She spends a lot of time looking out the window and waiting for Santa and his reindeer. She loves Santa but hates a damn reindeer. 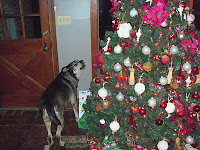 Posted by Editor at 9:43 AM No comments:

The Ball At Dagger Hall 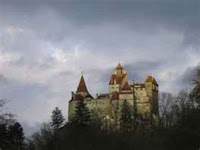 Tonight is the big shindig that Denise and I have been working on for a month. I am completely broke so it should be a good one. All the Dukes and Duchesses of the Valley will be there. The Royal Dog (Camo) will be in attendance. This will be some party with glitzy furnishings, food that I can't pronounce much less eat, Hors de'vores of teeny tiny things on silver trays and enough liquor to float an army.
Intrigue? you got it. Spies, crooked lawyers and bankers, sultry women, nuclear scientists, academia, nouveau Rich billionaires, secret messages and international business deals.
There will probably be at least one murder before it is over.
Should be a hell of a party.
Posted by Editor at 3:09 PM 2 comments:

A Hog for Christmas

This past weekend the deer were running everywhere at the famous Christmas Place but our hunters (including me) could not get their sights on a big one to put on the hanging pole. My 85 year old father did not let this bother him as he headed to the GameWarden Stand and shot this 200lb. hog. I know I make a lot out of his age and hunting ability but how many 85 year old men do you know that are still actively hunting at all. This nasty jet black varmint came out at the end of the field and he downed it at 200 yards. Congratulations and Merry Christmas! 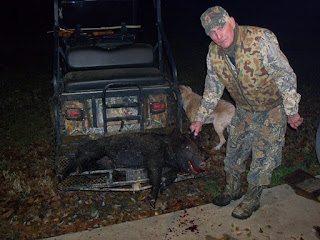 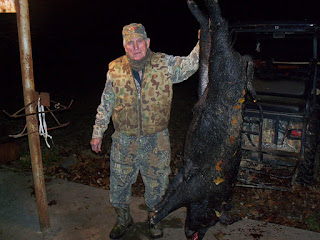 When Burney found out how much fun it was, he shot the damn things twin. 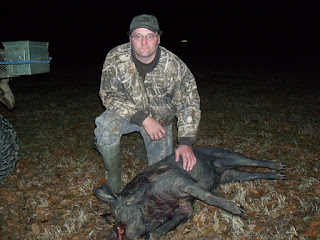 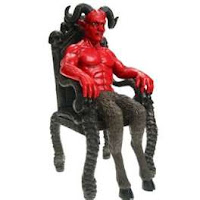 I don't know why bucks are attracted to him, what with the fire, smoke and smell of brimstone surrounding him, but they do. My evil brother (no, Paul)
likes to use his shiny new muzzle-loader and brags about how great it is.
Satan sat in his stand as bucks ran all around him. A big 10 point walked up to him (perfect) and he leveled his trusty muzzle-loader and pulled the trigger. CLICK!
Click? Oh crap! CLICK! The buck, surprised to be alive, staggered off. No amount of cursing or fiddling with the infernal gun would make it work. Later he called and asked what he should do. My advice was to take the damn thing and sling it as far out into the lake as he could and go buy a 45/70.
We will find out just how smart he is very soon.
Posted by Editor at 4:39 PM No comments: 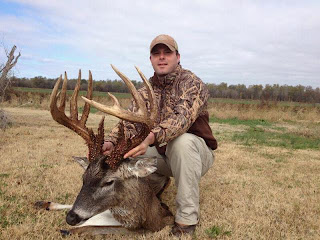 fact or fiction that is a hell of a picture. Will let you know.
Posted by Editor at 5:27 PM No comments:

Burney Gets A Big buck

While I was up here shopping, doing yard work and practicing my needle-point, Burney was busy taking care of business at the famous Christmas Place. He shot this big 210 lb. 8-point at 1 o'clock in the afternoon. (SOB)
Burney has hunted extremely hard this year and it is a well deserved big buck. Now I am putting him on pig patrol. Congratulations Burney! 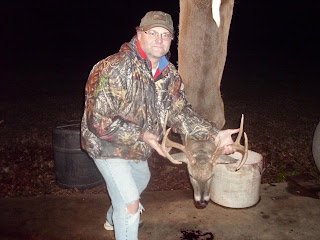 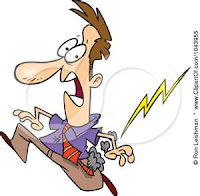 Nope. I am not going to camp this weekend. I am not overly obsessed with deer hunting like my evil brothers. I have a lot of work, Christmas shopping and household chores to get out of the way. Plus I really need to take Denise out on the town.
I am tired of being around these people that just want to hunt all the time.
There are more important things in life than deer-hunting. I swear!
Posted by Editor at 10:02 AM 7 comments: 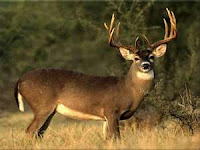 I wake up in the morning
there's been a frost in the night.
As the sun comes up I'm dreaming
about bucks moving at first daylight.


The phone is always ringing
I won't answer it at all.
I know my buddies are calling
with the news of a big Swamp hog.


I got the blues. 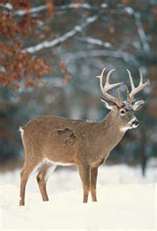 Oh Lord, the working deer Blues.
Can't wait for the weekend to get here
then my boss begins to call.

Woke up this morning to see snow falling and it has continued most of the morning. There is nothing more exciting than seeing a big old buck creeping around in the snow. Unfortunately the snow is not going to stick enough to stay but it has been fun to see.
The Christmas Place is absolutely beautiful when it is covered in snow, especially when the rut is on and the bucks are moving.
Posted by Editor at 12:31 PM 1 comment:

Rockin Around The Christmas Place

Everyone poured into camp on Friday to hunt that afternoon and before you could say "Where Did Satan go?" gunfire erupted over the hill.
Paul had us go help him drag in this fine 8-point from some ungodly canyon that night. He spent the rest of the night drinking, bragging, crowing and giving us hell. For most of us, it looked like another long season starting. 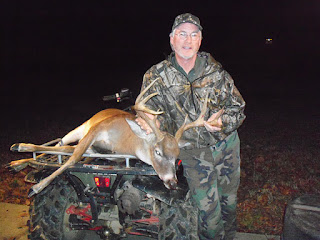 I went to my stand with a heavy heart and saw nothing the next morning and decided to give the old college try to my stand up the lake. This pretty nine point came in chasing a doe and I got him in the boat and back to camp way before dark. Now the pressure is off. 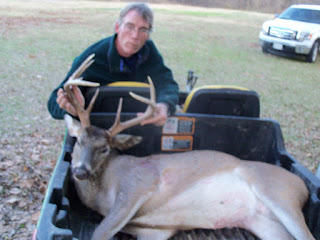 Burney got a hog later and that was that. So the pressure is off Trent, Paul and myself. I don't know if I will get another buck but I am about to get after some damn hogs.
Posted by Editor at 10:52 AM 5 comments:

Yes, it is supposed to rain but that's not what I am really talking about. Over on my stand it should be barren, cold, lonely with no deer and no sign that one has ever been there. At Paul's stand the deer will be running hot, grunting, jumping, chasing does and doing everything in their power to get in his sights. I feel a 14 pointer coming his way. Trent got a 13, you know a 14 will head toward Paul as quick as it can. The rich get richer. Meanwhile Burney is hunting hard at the Spike Camp, don't bet on him killing a damn thing. The Mailrider is supposed to be there and he has hogs on his mind. He's a hog hunting fool. Maybe that's what I should do. Spencer is finally getting into it and will be here tonight. A doe master if there ever was one. Will post pics of all the action and my dog of course.
Posted by Editor at 11:05 AM 2 comments:

No, I am not talking about Spencer and Michael's problems. I am talking deer hunting. The weather has been at 28 degrees and sunny the last couple of mornings with a light frost. Perfect weather for those nasty bucks to chase does all over the place. We are leaving tomorrow for the muzzle load season for bucks. It should be very interesting and fun.
Posted by Editor at 9:35 AM 2 comments: