Wanda and I spent from Tuesday night until Sunday at the camp working on various projects, but primarily completion of the bulldozer work which cost $3,000.00.  The bulldozer operator was Tom Gordon and he did an excellent job.  We got roads opened to The Graveyard, The Mountain, Sand Ditch, The Indian Mound, The Levy, The Hill Beyond The Lake, Arrowhead Field, Beaver Dam, The Hole, Stupid Stand, below Double White Oak, The Big Woods at Double White Oak, The Box Stand Field, and The Secret Field.  We also worked on the roads at Crossover, Spike Camp, the main road past Spike Camp, Negotiation Log, and Kudzu Road.  We built a new road with a ford that connects Pond Stand Corner to The Elbow.  We also removed big trees and stumps below the camp and at The Elbow.  Finally, we removed Dad’s garden which had become an eye sore.  None of the roads in the hills need to be driven on with a tractor until we get a big rain that packs the dirt down.


It is still way too early to plant our food plots.  Therefore, I see no need to have the seed for this weekend’s work weekend.  (However, we could put some rye grass, etc. on the steepest parts of the roads to help prevent erosion and where the garden was in order to make it look better.  In addition, I would recommend that we put some Triple 13 around the walnut trees in The Witch’s Yard and clear out some of the grass across the road from them where some young walnut trees are growing.)  I would recommend that we plan to plant the weekends of October 12 and October 19.  (Remember, the Squirrel Hunt is planned for the weekend of October 26.)


Instead of planting this weekend, we need to finish the disking in the big fields in the Delta and repair deer stands.  (Paul Jones is not planting his fields until October 19.)


Wanda has the camp in great shape.  However, we could not find the missing burglar alarm which needs to be reactivated as soon as possible.


Finally, the ticks, mosquitos, and gnats are the worst since we have been at The Christmas Place.  Be sure to apply plenty of insect repellant.


See you all at the camp this weekend.


Paul B. Howell, Esq.
His finger is sore from all the pointing he did for the bulldozer guy 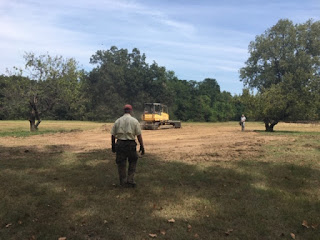 Paul "Lipflapper" Howell is finally down at the Christmas Place taking care of the bulldozer work, which was supposed to be completed a month ago. WE all knew it would be a fiasco but we only gave him ONE Job.


At least it is being done, No telling how many bulldozers we are going to be liable for. 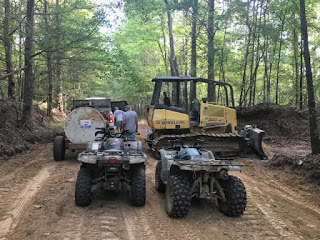