The Tribe Of The White Arrow

Chief YoSenAToBy was the leader of the Chickasaw band of Indians that lived at the famous Christmas Place
many moons before the tribe was moved on “The Trail of Tears” to Oklahoma. He was a very smart leader and became famous in Mississippi as the leader of the Tribe of the White Arrow.

The proud and cunning warrior had a vision when he was made Chief. The Spirit of the Great Deer of the Hills appeared to him and showed him the white rock in the streams and sides of the bluff and told him to protect his people in a way that all would realize the greatness of the Tribe. 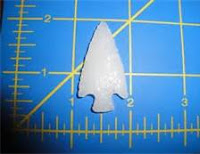 As the Indians made arrowheads, he realized that his tribe would become widely known in the Indian world if all of his warriors would use the abundant white quartz in the creeks and hillsides to make arrowheads and spears. Later, they even dyed the shafts of their arrows white and became much feared and respected among the Mississippi tribes as the white men first entered the country.


We find the damn white rock everywhere and the yellow streaks in it sure are pretty, but we just toss it out of the fields. The arrowheads and spear points are all over the place but who wants a lot of leftover Indian trash poking holes in the tractor tires and breaking our disk.
Posted by Editor at 8:00 PM 2 comments:

The owners of the Yalobusha Brewing Company have been negotiating for months, and bothering the crap out of me, to make a deal with Thunderhoof King of the Deer to name their new brew, Thunderhoof Beer. That stupid deer has no interest in a beer named after him. Here are Denise and me with Ronnie and Vivian Snider visiting the new Brewery during the Watermelon Carnival. 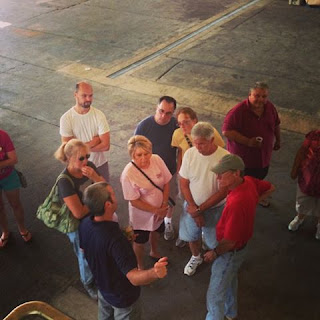 Last weekend Dad and his crew ran lines on the river. They brought in a whole boatload of catfish. 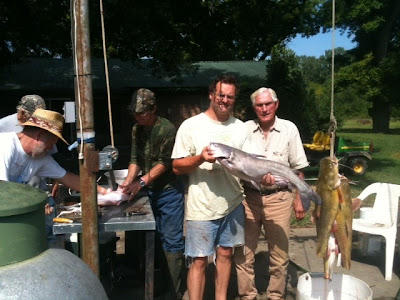 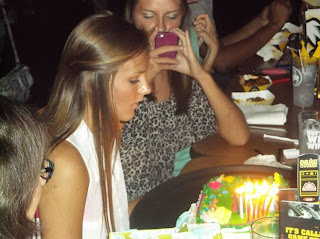 We went to Buffalo Wild Wings for Erin's 16th Birthday party and yes she got an I-phone. She just turned 16, clear the streets she gets her drivers license next week!
Posted by Editor at 10:40 PM 1 comment: 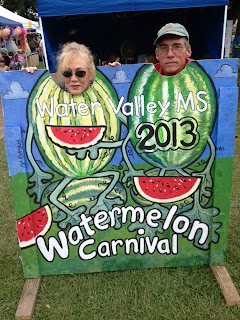 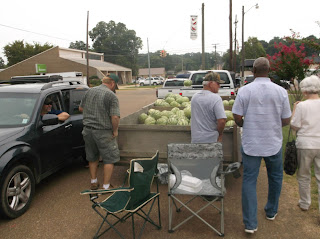 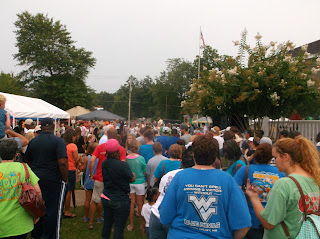 crowds of people melting in the humidity 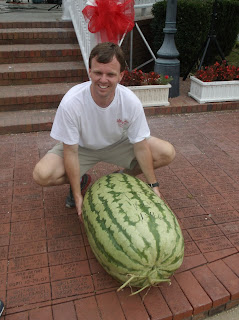 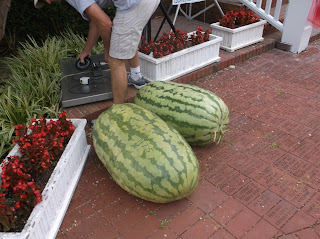 The largest watermelon this year was 147 pounds

The vendors are setting up across the street from Howell Enterprises and the excitement of the annual Watermelon Carnival is beginning. I do not know if we can beat the excitement from last year as the world famous skydiver, Dirk Danger (the man without fear), jumped from a biplane that flew over the park in Water Valley to start the Carnival. Thousand watched as he did cartwheels and flips on his plunge toward the Earth and then watched as he screamed like a girl that his parachute would not open as he came zooming down and landed in a gigantic load of watermelons in the back of Percy McCall's pickup. Watermelon flew 30 feet in the air! We thought he was dead for a minute, until they dragged his stupid butt out of the pile with a broken arm, broken leg, 5 broken ribs and 2 black eyes. The crowd cheered and begged him to do it again but Dirk had had enough and left by ambulance soon after Percy gave him the bill for the Watermelons. I don't think he is returning this year.
Don't worry, we will be live blogging all the action at the DEER CAMP BLOG!
Posted by Editor at 7:05 PM 2 comments: