It was a scorcher as the Howell clan and friends gathered at the Water Valley Country Club for the 2016 Howell Open honoring Hershel and Jimmy Howell.
It was set up in teams for a 4 man scramble with Bebo in charge (who usually stacks his team), but this year they LET Betty Bullion win (again), her husband John played like a dog on another team which might have helped. My team came in second, and I know Paul cheated us out of winning though I am not sure how. His team came in LAST. Next year Aunt Marilyn said she would take his place if he couldn't play any better than that. Here is the winning team with the new trophy.
Ellis, Tom, Betty, Mike 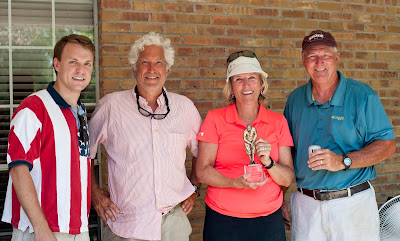