Do you remember when my evil brother, Paul, single-handedly rallied the team and led the Ole Miss Rebels on to victory over those SOB's from LSU and took the Magnolia Bowl Trophy? And do you remember right after that when he came out of the stands with a brilliant game plan for our confused coaches and ended up diving over the top for a touchdown and a serious drubbing of Mississippi State to win the Egg Bowl Trophy? And do you remember how on New Years Day in New Orleans he ran amok in the backfield, made amazing one-handed catches put 42 Oklahoma State Cowboys in the hospital with his brutal tackling and just whipped the crap out of them to win the Sugar Bowl Trophy? Well neither do I, but here he is. 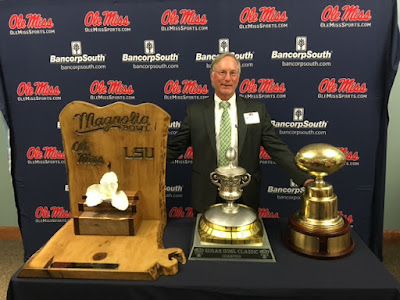 Posted by Editor at 2:38 PM No comments:

Paul Howell, well known turkey murderer, blood-letting psychopath and worst of all, Lawyer, has been missing for the whole turkey season this year. He has been spotted numerous times in Water Valley hobnobbing with the Oxford socialites and drinking heavily.
What has changed for this famous blaster of innocent animals?
Right now (for once) it is not all about Paul. It is about his daughter Hillary getting married. Wanda, (his beloved wife and Saint) has taken the reins and brought him kicking and screaming into line to do everything he is supposed to do to make Hillary's wedding perfect.
This means no hunting until the wedding is over. It means wearing a suit and tie on weekends and going to showers, going to wedding parties, doing WEDDING SHOPPING, and in general not being a nuisance to Hillary, Wanda or the American population at large.
We do hope he makes it but the scars may last forever.
Posted by Editor at 9:33 AM No comments:

Now You Can Too!!!
https://spotthestation.nasa.gov/home.cfm