It was October 31st (Halloween) when the 4 of us Trent, Paul, James and myself passed along the edge
of the Oxford Cemetery just after dark on our way to a Halloween party. As we passed it, we saw many people walking toward the center of the graveyard. An elegantly dressed man was leaning on a headstone and waved at us to stop and I felt compelled to pull over. I rolled the window down and he said “You're just in time to join the party. Come on!” Without thinking we all got out of the car and started across the cemetery with our new friend. He was 60ish with gray hair, a mustache and carrying a pipe in his hand. He looked vaguely familiar but I could not place him.
Less than 50 yards away, in a small fold of land, 8 or 10 men were gathered around a big headstone they were using as a bar and we bellied up to it as they served us a stiff drink. After a few minutes I looked down and read the name on the grave,it said William Faulkner.
A nice fire was burning in front of the grave and many people were already gathered around drinking and talking as a skeletal

Western Band started tuning up, and then the party really started. A real Grave Yard Hoedown! As the people danced, I began to notice their attire seemed from every era. They whirled and danced as the fire grew brighter was amazed to see that I could see through most of them. I, like my brothers realized we were in the middle of a real Ghost Party in the Cemetery but there was a calmness over me so that everything felt normal and I had no reason to be afraid. Several people slapped me my brothers and me on the back that I felt we should know or had known. It was a real ghostly Halloween Party and we were in the middle of it. Our host, whom I now knew was William Faulkner, thanked us for coming and kept the liquor flowing. James and Paul were dancing with a couple of Antebellum beauties, while Trent and I laughed, drank and discussed everything from how the War Between the States was going to what was Hoover going to do about this damned depression. We just toasted everyone and said “Don't worry it's all under control and there's going to be a chicken in every pot.”

We danced, we drank, we partied, I think we howled at the moon and then things started to blur.
All I know is that later, we woke in the car and everyone was gone. The cemetery was dark and there was no sign of our friend, Mr. Faulkner. No one spoke as I cranked the car and started off.
Not far down the road, we passed a young couple walking along the edge of the cemetery with their arms around each other. The man casually waved. It took a minute for it to register on us and for me to slam on the brakes. We all turned around to look again, but they were gone. We had seen many, many pictures of the young couple before. It was my Mom and Dad.

Posted by Editor at 6:12 PM No comments:

Old Solomon is the biggest, fiercest, wildest, and most cunning wild hog you will ever see and all the members at the famous Christmas Place are deathly afraid of him ( and they're not scared of much)
He roams our property in the Delta and he has been trapped, speared, poisoned, electrocuted and shot about 100 times but he is still out there watching and lurking in the forest. All of our guest are warned what to do if they see him (which is run) but luckily for us he seems to disappear as the first volley of gunfire starts in the fall each year.
This hog is more than big, he is gigantic. At the top of his sharp razorback he is almost 6 feet high and 10 to 12 feet long. His big head looks like the front end of a Buick, his tusk are at least a foot long and I believe he would weigh 800 pounds. Not 800 pounds like you see in the magazines where someone shoots a big pig wandering through the woods with a pistol or whacks him with a rock. This hog is a lean and deadly killer.. A true predator to anything that gets in his way, and I know from first hand experience.

It was early squirrel season when I saw him. I was walking the old road at what is called the Crossover area when I heard a crash and saw him barreling through the woods at me at 50 yards.
I did not hesitate, I took off like a scalded dog and made it to the first tree with limbs. It was a small sweet gum but sprang up into it as fast as lightning, the shotgun went one way but I scampered up the tree like a squirrel just as Old Solomon hit my boot and shook the whole tree. To the top I went until  I could go no higher and the tree threatened to start leaning over. Unfortunately my feet were barely 10 feet off the ground and the mad giant circled around growling and ripping up the ground.
I was treed and then everything got slow as he stopped and looked at me, just studying me. I looked at my foot, the whole sole of my boot was sheared off, as if by a razor. Just then Solomon turned, rushed the tree and slammed into it, almost knocking me out. I felt the tree give and readjusted. I had to do something quick. I reached in my pocket. Shotgun shells- I threw them at him, he just kept staring up at me, Compass- I know where I am (deep s##t), Map- no, Knife- yeah, right,  Water bottle- he doesn't look thirsty, Snickers Bar- I don't think so, Flashlight- Oh Crap! Old Solomon made another rush and slammed into the sapling again. I held on for dear life but the tree was leaning now.
I reached in my pocket and grabbed the first thing my hand landed on, the Candy Bar. I opened it, and threw it down in front of the huge snout of the creature. He didn't move, we stared at each other. A second later his big head went down, he grabbed the candy bar, looked at me, then trotted off into the woods. I stayed there another hour, found my shotgun, then slunk back to my 4-wheeler and camp.
The moral is, if you run across him, a Candy Bar could save your life.
Posted by Editor at 4:29 PM No comments:

The ground here is extremely dry, in fact the whole state of Mississippi is under a burn ban, and there just aren't many squirrels this year. We had a great camp but for a while it looked like it was going to be hog and dumplings for dinner instead of squirrel and dumplings. Tim Crosby killed a nice hog Saturday morning when it wandered by him and he was able to slip some buckshot in his shotgun.
We ended up having just enough squirrels to make the stew. 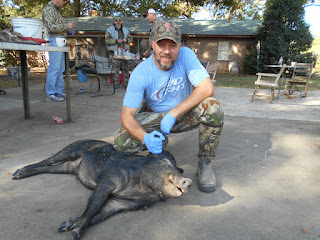 It was good to see everyone there and excited about hunting. It is also bow season here and Crosby got a couple deer too. Terry Cutrair got a deer too and as usual our so-called best bow hunter Burney got zilch. Joe Newman handled the organization of the hunt and did a fantastic job. Thank You.
I said I would mention Stewart Allen in my article. Hi Stewart!
We had another great weekend at the famous Christmas Place and looking forward to more as the main deer season rolls towards us.
Posted by Editor at 4:27 PM No comments: 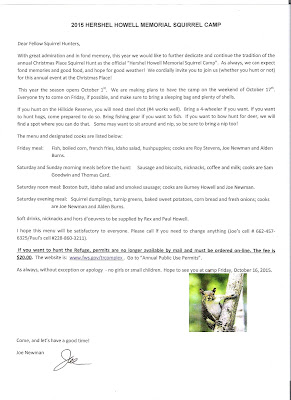