The deer season is finally winding down and this past weekend we headed to camp to give it the old college try to get a big buck and finish out the season.Me, Trent, Burney, and our old friend Bob Phillips and his son Greg. You remember Bob, you know Lazarus. Well, he was back from the dead but no, he did not get a deer. The weekend belonged to Burney. 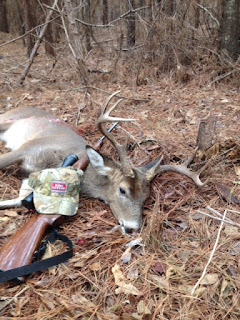 He started out by arriving Friday afternoon and heading for the Levee Stand. Walking along he looked out across the field and 3 bucks were out there munching on grass and paying no attention to him, He puts the big stalk on them, gets close enough for a shot, rises up, Click! His gun does not fire, He ejects the bullet as the deer decide maybe they should be in a different county. Boom! The deer are gone and Burney is staring at one of those damn silver coated bullets you all have been buying. THEY ARE WORTHLESS. I don't know how many of those I have seen misfire.
He looks for the deer he shot at, no luck and heads to his stand. He gets in the stand and after a long two minutes, a herd of hogs comes racing at him. Boom, Boom! He gets one but is out of bullets. Another tip always carry six bullets. He finally gets the hog back after dark, but his rifle must have been still looking for action.
We had good hunts Saturday morning but no deer, and in the afternoon we headed out with Burney heading to the 72 acre field. After a long two minutes, a big buck moseyed out in front of him and this time he was actually able to hit it. Congratulation! No one else did anything on the weekend, but the last weekend is coming.
Posted by Editor at 10:37 AM No comments:

Satan (Paul Howell) sat on his deer stand Sunday morning in the bitter cold waiting on a big buck to cross his path. He could hear deer all around him and knew he was just minutes away from blasting the deer of a lifetime. The sound of running hooves in the stillness, cracking limbs, the flash of white antlers! Yikes, there he was! How many points does he have? Satan ripped off his boots and frantically started counting his toes as he tried to hold his binoculars on the buck. Boy, his toes looked big through those binoculars. The horns looked big too!
The buck was moving down the hillside now and Paul tried to judge him. HE WAS GETTING AWAY! He aimed through the brush, his boot fell out of the stand , noisily distracting him, the rifle ROARED! Arrggghhh, dead tree 8 feet in front of him.
He bolted his rifle, the buck froze, Satan leaned over and put the X on him. BLAM!
He bolted from the stand and ran barefoot down the hill thinking about the huge deer awaiting him....
Not so fast my friend!
Yes, a nice young 10 point was at the bottom of the hill, not the giant monster buck he imagined.
He stood there a minute unbelieving.
his feet were getting cold. 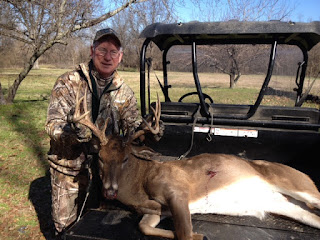 Will Somebody Go To Work?

Jeez, am I the only one with a job around here? While I am busy keeping the wolves away from my door, everyone else is having a hell of a time deer hunting. Hey! There ought to be a law!
My cousins hunt everyday. Here is a pic of Austin with a nice buck taken this morning.
Tell that kid to get a job. 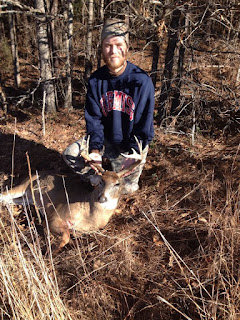 Posted by Editor at 2:55 PM No comments:

This past weekend my friend, Marian, arrived at the famous Christmas Place rarin' to get after the deer. She had not shot a deer in 3 years, but she did work on her bucket list of getting a hog during that time. The weather was cold and windy, and not very suitable for deer hunting but she was game and we put her at her favorite spot, Arrowhead Field Saturday morning. No one had any luck that morning, the weather was just ugly and she did not see a deer.
That afternoon we decided to hunt together and headed for the Dove Field.
It was cold, the wind was howling and I was afraid Marian was going to freeze to death. I asked her several times if she wanted to go in but she said she wanted to get her deer no matter what.
Just at the last minute of daylight a nice size doe walked in the field at 85 yards. I asked her if she could hit her and through chattering teeth she said yes. I put my fingers in my ears. BOOM!
The deer reared, spun around and fell right there. A perfect shot!
It was a great night as everyone congratulated her and toasted her good luck.
She didn't get a hog this trip but says she will be back to get one soon..
Congratulations on a great hunt, my friend. 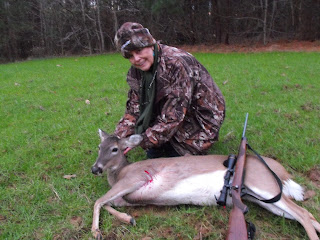 Posted by Editor at 2:18 PM No comments:

It was the Greatest Weekend Ever! 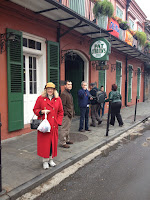 Denise and I rolled into Gulfport Thursday in time to watch the playoff games. We had drinks and a New Years Eve party, but everyone was concentrating on the Sugar Bowl. Denise and I, Paul and Wanda, James and Brock, Troy cone, Michael and his old roommate. ANTICIPATION!
Our day started at 5:30 with coffee and a shower and by 7 we were on the road to New Orleans.
First stop- Café du Monde. coffee and beignets.
It was really cold, but we wandered Jackson Square and even did the French Market. Denise got a cool hat before we made the number #1 stop at Pat O'Brian's . By then it was filling up with Ole Miss people and the Hurricanes were going quickly. we sang, we hollered, we cursed those damn LSU people unmercifully. 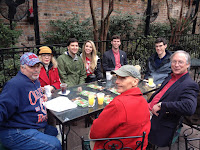 It was great! We staggered out, and headed to the stadium 4 hours early. So did everyone else! There was a party rocking outside the stadium and we danced and greeted all the people with Hotty Toddy. there was a mad dash to get in and suddenly there we were on the 30 yard line as the game unfolded in front of us. Truth is, it was not even as close as the score. They beat those Cowboys like rented mules. Thunderhoof led the halftime show and of course you all saw Kelly and Treadwell ride out of the stadium on his back.It ended too quick and we headed toward Bourbon St. with the 48-20 WIN.
We ended up at Deuce McAllister's and so did about 1000 Ole Miss fans. We sang, we hollered, we cursed those damn LSU people some more. By the time I looked up again from staggering through the French Quarter it was 2:30AM, We headed home after the most fun you could have. 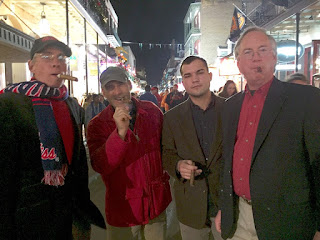 Posted by Editor at 2:31 PM No comments: