Hog Camp is set for the last weekend in February. (the 25th) Call burney if you want a groovy T-shirt. Remember Matt and Phillip that you are invited. I would invite Jody but a wild hog might jump in her hair. 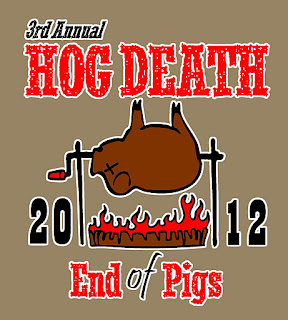 In the spirit of the man that shot the last free-ranging buffalo, blasted the last carrier pigeon, roasted the last Do-Do bird and scrambled it's last egg, and made a great wing shot on the very last Ivory Billed wood pecker; Paul Howell (aka Satan) made sure this past weekend to get the last deer off the Christmas Place as he shot at every deer that moved, blinked, jumped or fled before him. 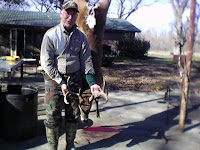 Blam! A doe at Stone Flat!
Blam! A buck at Spike Camp!
Blam! Holy Crap! Bambi's mother!
A hail of gunfire rang out over the property and through the swirling haze of smoke Paul Howell strode spitting death in every direction with his 7 mag. as the season drew to a close. Ahh, Paul Howell the American Hunting Poster Boy.
Posted by Editor at 2:40 PM 1 comment:

The end of deer season is upon us and that damn stupid deer is still roaming the hills laughing at us. I have hardly seen that evil creature all winter but He did use his horns to knock down my treestand once this year (ha-ha real funny) and several times I heard him munching acorns just outside of my vision. (sounded like a gravel truck) I really need to put a bullet in his hide before deer season ends or I will have to put up with his hijinks all summer (again). 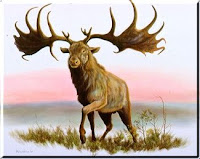 While I am fishing, he will come up and want to eat my peanut butter sandwiches, or just swim lazy circles around my boat. He will follow me around in the woods poking me with his antlers or racing my 4-wheeler every chance he gets. It is terribly disconcerting to have a deer the size of a moose staring in the window when you are trying to sleep. Then he and Camo have to race around the camp at all hours of the damn night playing tag, and Dad just babies him, gives him pecans, and milk duds, even having burping contests and Dad encourages him to harrass me and thinks it's funny.
I don't know if I can take another year of that varmint.
Posted by Editor at 1:29 PM 2 comments:

My evil brother (no, Paul, the one from the coast) decided that he would go duck hunting this past weekend at the famous Christmas Place. He finally talked Dad in to going with him and before day he threw his decoys, dad and all their other junk in the Gator and took off for the lake. At the lake he threw all his junk, decoys and Dad in the boat, tied a rope to it and waded the edge for 250 yards to a spot halfway up the lake. He threw his junk and Dad on the bank, set out the decoys and then totally exhausted staggered into the brush to set up. 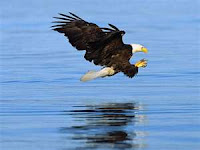 The wind was howling and the ducks would not cooperate. They kept landing on the big water just out of gun range and not in the little cove they were set up on. Finally, finally, a big mallard came winging in and Paul fired. The duck went down in the open water. They shot a few more times and the wind died down. Dad blew his duck call. "Quack, Quack, Quack" and down the lake came a giant bird. It was not a duck. By the time Paul said "What the hell is that?" The damn thing had swooped down, grabbed his duck, and took off! Dad said "Uhh, that WAS a bald eagle, looked hungry to me." The eagle circled the lake with the duck in his talons and headed back into the swamp. Paul threw his junk, decoys, and Dad in the boat and started trudging back up the lake. We don't need a damn duck stealing eagle taking advantage of our hunters. It looks like we have a ducking problem up at the lake.
ed. note (the exact same thing happened to me the last time I shot a big 250lb. buck and it fell in the lake.) Damn Eagles!
Posted by Editor at 9:56 AM 5 comments:

Dean Lammey came in this past weekend and put the wollop on the does. He took these two up at the Dove Field.
Posted by Editor at 3:53 PM No comments:

Our cousin, Jimmy Lammey (Judge Lammey), has been hunting for deer about 100 years and never, ever manages to gets one. Miracles do happen. Here is a pic of the Judge with a nice 8-point he took at Abbeville last week. Congratulations, Cuz! 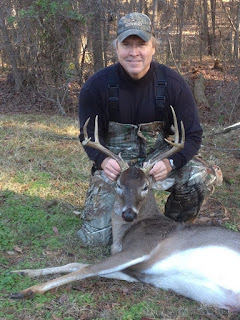 The Mailrider brought our old friend Clint down for the weekend and he got this big doe. He would have killed a big buck but he would not take my advice. (typical) 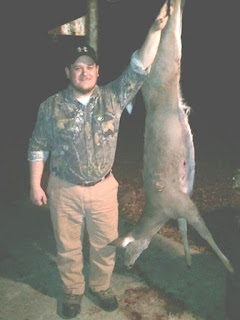 Paul's beautiful daughter, Hillary, just happens to have a boyfriend. So she sent John to camp to hunt with Paul. The things some people will do to try and get on his good side. John and his friend both managed to get their deer! Jeff Peeples and John Ward. 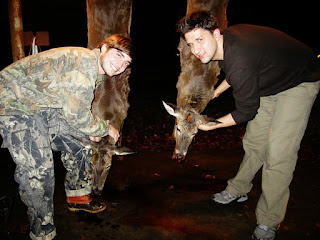 according to Hillary, John is the one with the dreamy eyes on the right
Posted by Editor at 9:24 AM No comments:

Every now and then some unwitting guest accidentally kills a big buck at the Christmas Place. Paul usually sticks his guest in some Gar Hole where he will not even see a deer but somehow one came wandering by our friend Tim Crosby. This was a great 180lb. 10 point! Congratulations! 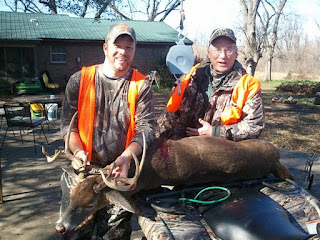 Notice the look of utter disbelief on Paul's face.
Posted by Editor at 9:35 AM 2 comments:

Wheeling With A Whelan

Spencer got a .35 Whelan for Christmas 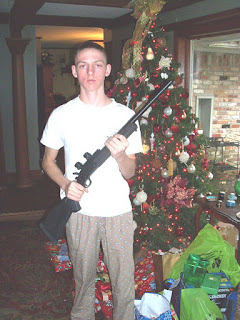 Posted by Editor at 3:07 PM No comments:

My 12 year old daughter, Sarah, swears that she is turning 18 today. Happy birthday and wishing you all the happiness in the world. 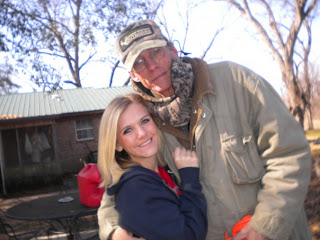 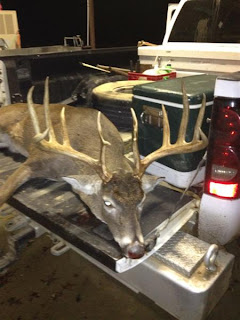 Trent took his second 13 point of the season this past weekend at the famous Christmas Place. He wandered up on the Indian Mound and blasted this 200lb. buck we had called Whitey. SOB!!!! 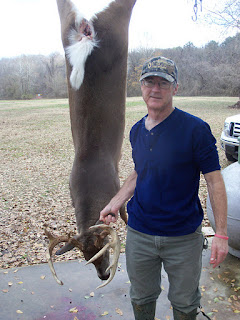 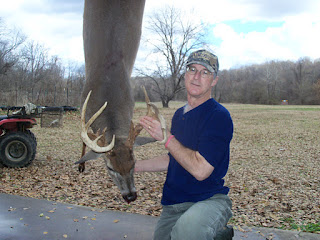 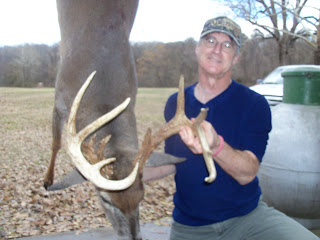 Camo and I are heading back to camp tonight. Camo is excited but I just don't have the fire. Of course, that could change if Granpa Rocking Chair walked out in front of me. We will see.
Posted by Editor at 4:46 PM 1 comment:

Austin Gets The Big Buck

Austin finally got his big buck. This wonderful 10 point was taken at the Double White Oak stand. 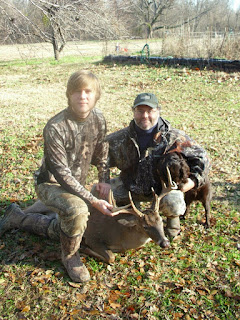 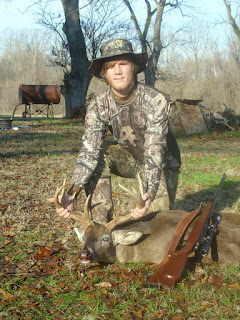