I went up the Lake Saturday morning and had a really good hunt. saw several bucks but not the big one I wanted. Came in for lunch and Trent asked if he could go up the Lake with me that afternoon.
We headed up the Lake and I dropped Trent off in a gar hole where he would never kill a deer much less see one. I got on my stand and a couple of hours later heard him shoot. BLAM! The sound reverberated off the water and I hunkered down. Saw wome more deer and a couple of nice bucks and right before dark a big hog came out. I cut down on him. BLAM, BLAM, he was still moving, BLAM! I finally got the hog in the boat after dark, found Trent, got his big buck in the boat along with all our equipment and rifles and headed toward the dock. The little aluminum boat was absolutely full and loaded to the gunwales. The little electric motor could just barely push us and I think all you could see was our noses coming up the lake cause the boat was almost under water.
We finally made it to the dock and Trent turned and said"Now, that's a Mississippi Boat Ride!" 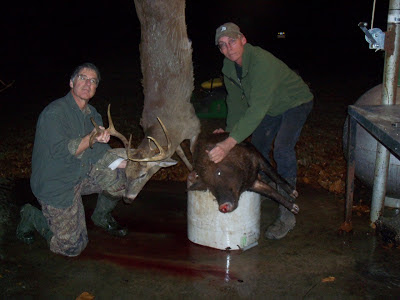 Trent's big buck was 185 lbs with a 17 inch spread. Really, Really Nice, but the important thing was my giant hog. It was a big Rochester Redback. the most evil hog of all. 160 lbs. of pure murderous hate with 3 inch tusks dripping with blood. I should get a medal! Here's a pic of our successful Thanksgiving weekend hunt.
Posted by Editor at 9:48 AM 1 comment:

Opening day of the first gun season was the most successful we haqve ever had. My dad fell and hurt himself Friday night and put a damper on things but everyone hunted Saturday while he laid up
Paul took this fantastic 8-point 200 lb., 20 inch spread buck about 7:30AM when it came wandering up to him like they always do. 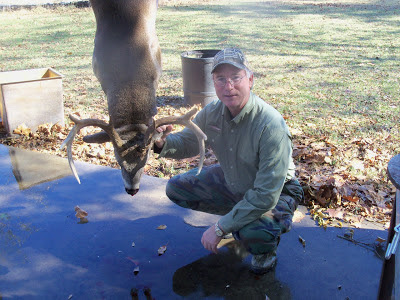 We, of course were all happy and excited for him, as we tried to decide whether to shoot him or knock him in the head with a stick as we listened to him drone on and on about it.
That afternoon I headed up to the South Corn field, Spencer went to Spike Camp and Trent went to Squirrel Road. At 5:30 this super nice 7-point 190 lb., 17.5 inch spread buck came through and BLAM! I got my buck! I heard Spencer shoot and when I got to camp Spencer had taken a really large 140 lb. doe. ﻿ 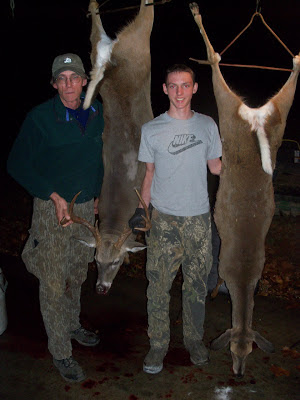 So, two nice bucks for opening day, which we have never done before. Paul and Trent also got hogs this weekend to top it off. The only drawback is Dad has a couple of cracked ribs and will be on the sidelines for the unforseeable future. ﻿
Posted by Editor at 9:17 AM No comments: 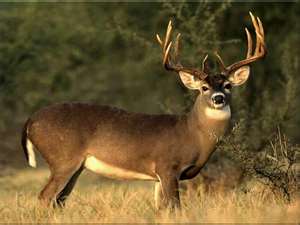 Today is deer eve and everything is quiet as we wait for opening day to arrive. All the rifles are sighted in, the stands are hung from the trees, all the wives are mad as hell and it looks like the big bucks are moving. Another gun season is about to start! Hurray!
In the distance you can hear a few people still shooting as they zero in their rifles, most men have their hunting stuff ready to go and I am heading to camp in about an hour or so. will give a report and hopefully start blogging regularly with the new season starting.
Looks like a low turnout with Paul, Trent, Dad, Spencer,Erin, and myself at camp tonight.
Tomorrow we (I) need to get a big buck on the pole to get everyone fired up again.
Posted by Editor at 10:43 AM 1 comment: 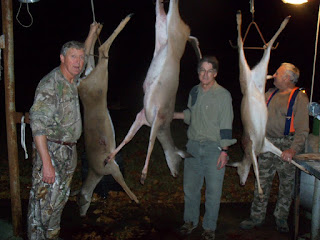 It was a fun weekend as we got 3 deer and 1 hog this past weekend. Trent brought two guest (Jim and Jack) from Tennessee and Paul brought Lex Luthur (Dave) , Stewart Allen and his son up.
Stewart, Jim and Trent got deer and Trent also got a hog. Deer season opener for bucks is next weekend.
Posted by Editor at 12:21 PM No comments:

Bow season is already open, but the first muzzle load season opens this weekend for does only. Should be an interesting weekend. Paul will be there with his entourage and even
Trent is bringing two guest. I think they are Kentucky moonshiners. My buddy, Mr. Jones cancelled and the great white hunter, Joe Black could not make it. We will see if there are any deer wander around and maybe pop a hog if I get a chance. See you at the hanging pole.
Posted by Editor at 3:27 PM No comments:

All of you need to remember to go and vote for Thunderhoof for President today. I can assure you that he could clean out the whole Congress and all those lobbyists in about 15 minutes with his giant antlers. VOTE TODAY!
Posted by Editor at 2:42 PM No comments: 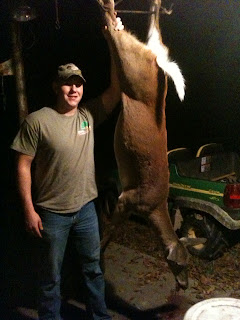 The only Lammey that is a real deer hunter. Dean got this nice 135lb. doe Saturday afternoon with a perfect shot.
Posted by Editor at 2:26 PM No comments:

This weekend Camo and I are headed for camp to get some things done. Erin is coming up with Paul to help, so it should be a fun weekend. The main thing I have to do is go up the lake to check and do repairs on my stand. I hope to launch the SS Whitetail with my first mate, Camo, and my navigator, Erin, Saturday morning and sail South through the hordes of angry fish, eagles, and assorted Lake Monsters to reach my hidden stand. Should be interesting.
Posted by Editor at 9:59 AM No comments: 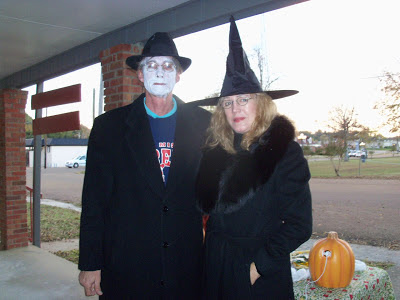