This was the 50th Anniversary of the Watermelon Carnival and it was a blast! The day started with PHIL'S PHAMOUS PACHYDERMS coming through the park and trumpeting loudly enough to wake up everyone in town. They danced, sat up and thrilled the crowd. Leaving the park they hit the watermelons and I think the City had to buy about 100 of them after the elephants crushed them, threw them, ate them and carted off as many as they could get.. Friday was setup and start the party time but we also had guests. The New Orleans Legend and World Renown Artist CHRISTOPHER PERAGINE and his wife Ellen,(the Palates Queen of New Orleans), who happens to be Denise's cousin. His art exhibit was the talk of the town, but being from New Orleans and painting ships, the ocean and local scenes he did not understand that Here in Water Valley, paintings need watermelons and semi-nude girls to be really appreciated. He will do better next time. 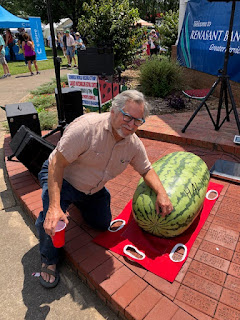 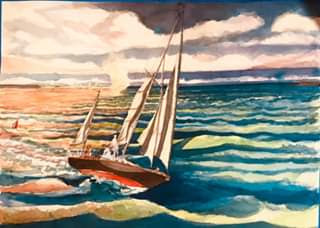 We had a great crowd at our party that night as the band played and the politicians made insane promises. Of course there was Erin's Birthday (the Dark Princess), We visited od friends, consumed a lot of beverages , enjoyed the Fireworks Display and staggered home early in the morning. 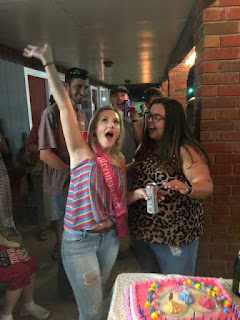 On Saturday there was watermelon eating contests, seed spitting and lot and lots of vendors selling anything you can imagine (lots of birdhouses?),Burney was in the BBQ cook-off and won a prize, after he burned his hand off, for Most Persistence Entry, Music, music and of course the watermelon
weigh-in. We all enjoyed wandering and Denise and Wanda made the most of it. 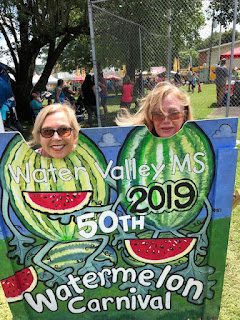 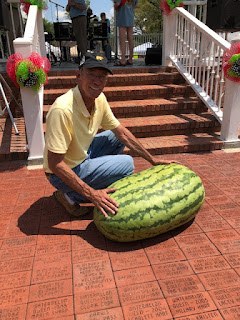 Thank you to Christopher and Ellen for coming to the Carnival this year, It was great. 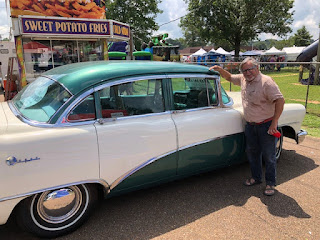