Denise and I spent last weekend in New Orleans. We went to attend the wedding of her cousin, Ellen and had a wonderful time. Our hotel was in the Garden District which is an area that I have been wanting to explore for years and we did! We enjoyed the wonderful old homes and architecture, made our way to the French Quarter, ate and drank everything in sight, visited the WWII Museum and the Civil War Museum. It was all great, but mostly I wanted to ride an old streetcar that winds up through the Garden District. The famous Thunderhoof streetcar.. It has been rolling along almost forever and is famous in New Orleans and famous to us also. I think the name and why it is named Thunderhoof is almost lost in history but probably has to do with the fascinating story of the giant buck deer that charged the British lines and held them at bay until the American forces could counter-attack and win the Battle of New Orleans. General Jackson at the time said "That's one big deer, we ought to name a streetcar after him or something" So there, history was made. If you don't believe it, here is a picture. 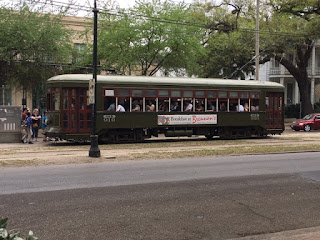 Wedding pics of Ellen and Chris 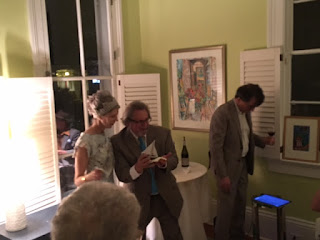 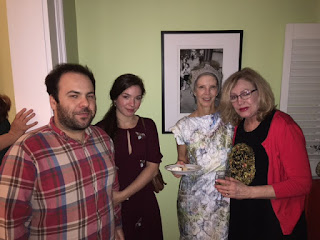 This past weekend was the first weekend of turkey season and Paul, James, Michael, Terry Cutrair and his son-in-law Brantley plus myself were all at camp to get after the turkeys.       ( I go once a year whether I want to or not)
A lot of fun was spent around the camp fire and a great meal supplied be Terry's wife Pam on Saturday night really made the weekend but Friday was hard as we were up and about hunting with no results. Brantley was hunting with Paul so the odds on him getting a turkey were pretty slim as Paul is a shoot first, ask questions later kind of guy.
Saturday morning Brantley went with Paul again up behind the Indian Mound area and at daylight a big turkey gobbled right in front of them. They set their decoy, jumped in some brush and almost immediately the big gobbler came running. Now Brantley is a nice guy, even though he is an insurance salesman. He also has never shot a turkey and was stunned as the turkey started strutting only 15 yards away. For some reason we will never know, Paul could not get a shot and whispered "Shoot, Shoot, Shoot!" Brantley obliged and the big gobbler went up in a puff of feathers.
The turkey weighed 17 1/2 lbs, with a 10-inch beard.
A very well deserved congratulations to Brantley! 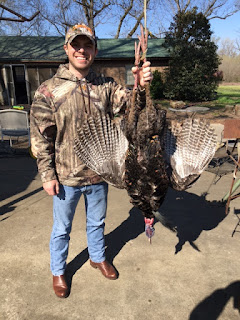 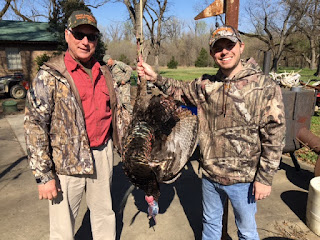 Robbie Parsons, looking all mean shows off his even more mean looking hog from the famous Christmas Place this past weekend. Congrats!! 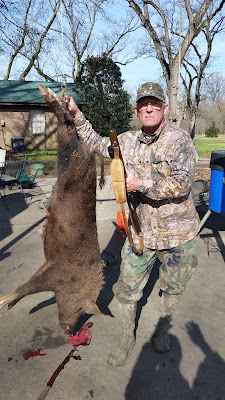 Posted by Editor at 2:48 PM No comments:

Where Have You Gone, Joe DiHoggio?

The annual Hog Hunt at the famous Christmas Place was a real dud this year. We have seen very few hogs this year and no one saw a hog during the weekend hunt this year. Where have they gone?
Deer season was a success and we hate hogs, but darn it, it would have been nice to have a few on the pole for our big hog hunt.
On the bright side, the weather was great and Burney's friends managed to kill about a 1000 beers around our campfire, so everyone had a great time. 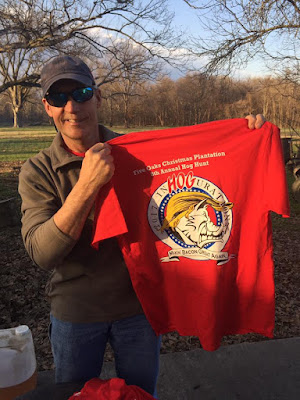