Down To The Wire

I have avoided camp this summer like the plague. I have been so busy that my heart has just not been in it but we are getting down to the wire now and there is a lot to be done. First, I have to get through this weekend for Denise's Birthday and then the Watermelon Carnival the next weekend. Then I am through and ready to start. So get ready as I turn my thought to the coming deer season and all the problems, perils and craziness that follows the Christmas Place Hunting Club. I am sure it will be interesting for you again.
I also received a secret package from Phillip at the Hog Blog  that I will be writing about soon.
Posted by Editor at 9:21 AM 1 comment:

Bridge On The River Hershel

It was at least 100 degrees in the shade on that August morning and my Dad was in his element. He had about 15 men standing around him in the backyard of the camp ready to work and he is not a man to let opportunities like that pass him by. We headed up toward the lake and stopped at the wooden bridge where he divided us into teams to work. He sent Trent and a few others to bush-hog and clear roads in one area, another group to do the same across the BeaverDam and the rest he said would repair the bridge. He reached in the back of his truck and pulled out 2 picks, 2 shovels, and a sledge hammer. I thought I was a dead man. The object was to remove the layer of packed gravel from the top of the bridge, remove the cross-ties, replace them and put the gravel back on. Greg Jones swung the pickax and struck the ground. Sparks came up and he did not even leave a dent. The ground was harder than concrete. Dad said "Get to work, I'll be back at Noon" . He turned to me and said " I need you to go get the seed and start taking it up so we can plant this afternoon. I felt like I had just escaped the Hangman's Noose, jumped on a 4-wheeler and disappeared. A little after Noon we showed up at the bridge, Jones and the rest of the group were covered in sweat and so tired they could hardly move. We went to camp for lunch and Jones feel asleep on the couch and would not wake up when we headed back out. I thought he was dead and the rest of the group was walking wounded. After lunch we all staggered back to the worksite and the whistling song from the Bridge on the River Kwai became our marching song. It took a couple more weekends and I did have to swing the pick but that day was the hottest most miserable work detail I have ever seen at the famous Christmas Place and is still used to threaten the kids with when they get out of line. Dad just informed me that all these years later, the bridge is now needing repair. OMG! 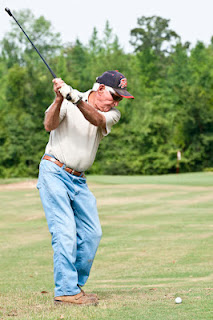 Hershel Howell-still smooth at 85
Posted by Editor at 11:52 AM No comments:

Little Rexy wants to play. GOLF!
We have been in a drought here for so long and the temperature has been 100 or better for a month. Now it has started to rain and it seems to rain every day now and just when I finally figured out my golf swing.
I just need a little time to play.
Posted by Editor at 2:33 PM 1 comment:

For at least 20 years the members of the Howell family and friends have played golf on the morning of July 4th. It is usually a scramble so that everyone can have a good time. This year was no different as Dad, Trent, Mike Edwards and myself beat the hooey out of Bebo, Larry Trent, Kent, Betty Bullion, and Greg Jones. 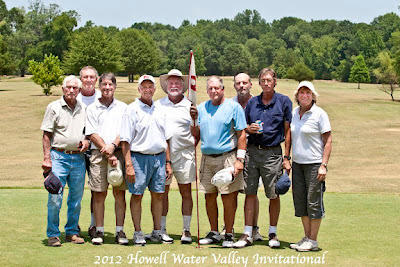 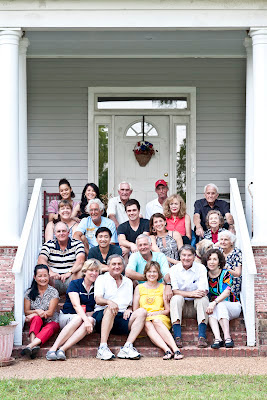 A small crowd for the Howell/Bullion Clan Meeting. Luckily no one was injured this year in a knife fight.
Posted by Editor at 9:15 AM No comments:

Trent hates a damn hog. Hates 'em. In fact he doesn't even play golf anymore, he just hunts hogs. The temperature is 105 degrees in the shade and he is out there hunting hogs. It is some kind of sickness. He recently purchased a whole truckload of sweet potatoes to feed the horrible things. I asked "Why would you want to make those hogs fatter?" He said "When they run, you don't have to lead them as much when you pull the trigger." 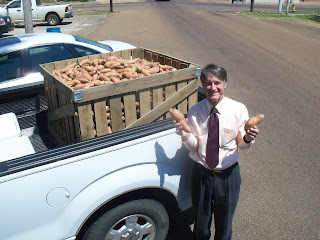 Here is Potato Boy with his new purchase.
Posted by Editor at 10:11 AM 1 comment: