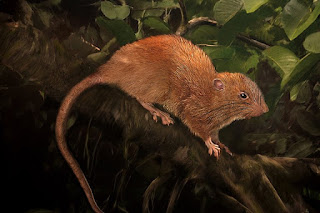 Scientists and Ratologists today announced the discovery of a new giant rat species discovered in the Bunkroom at the famous Christmas Place. Dwellers in the hell hole said "We thought it was a deer, since we've never shot one." Burney Howell said "I never said anything because they sleep in my bed and keep me warm in the winter" The new species is expected to be named after Mr. Howell.
Burneykus-Infectivo-Ratilacious
https://www.seeker.com/earth/animals/a-giant-coconut-eating-giant-rat-was-discovered-in-the-solomon-islands
PS It would eat coconuts if we had any.