Somewhere near the North Pole (Merritt, British Columbia) at the heart of an old abandoned mine, the mysterious gazillionaire Othmar Vohringer worked at the heat of a roaring forge. Fire and sparks flew as he beat the glowing metal into shape for his wondrous new invention.
Late into the night he labored in the secret mine with sweat running down his massive bronze chest and arms as he gripped the hammer to beat and shape the bars of pure gold into shape for the final firing
Carefully, the pure gold was poured into the form while his trusty apprentice Rex Howell kept the bellows pumping at just the right temperature.
Each piece was exquisitely hand crafted and Othmar had spent the day hammering the gold into a fine sheet to make the pieces which he now placed together for the final firing. The blaze grew and a bright orange glow filled the hidden cavern as Othmar watched. At just the right moment the huge tongs reached into the fire and pulled out the mold. Quickly it was doused into a bucket of water and Othmar placed the mold on the table, pried it apart and stared at his beautiful work through the steam and smoke. 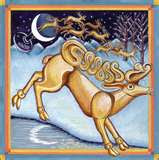 “Eureka” and “Sacre Bleu’” he shouted as he danced and chuckled to himself.
The Golden Grunt Call lay in his hands shining in the firelight. The most wondrous grunt call ever made and he imagined the beautiful and melodious sound it would make to lure in the biggest and mightiest of whitetail bucks. He slowly raised it to his lips and blew.
Squawwwk, Quack, Quack, MOOOO!
He stared, his face turned red, he threw it to the floor in a rage, he even threw in some bad words as he jumped up and down on the worthless deer call.
The fire had been too hot!
Damn that apprentice!
Back to the drawing board.
Posted by Editor at 12:28 PM

Great story :laugh: Eventually we will get that darn call to sound right.

Thanks for the link.