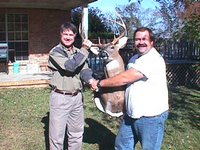 Water Valley, MS> After a year of lying in a ditch behind Trents' house, Mark Stewarts' deer head was reunited with him this weekend. Rex Howell cracked the case of the disappearing deerhead with his great sleuthing ability and dragged the moth eaten stuffed head out from underneath a pile of garbage in a steep gulley where Trent had hidden it. Much behind the scenes blackmail and threats of severe fines and lack of hunting time made Trent finally give-in, 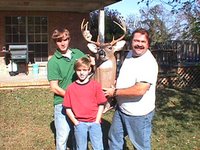 shine up the antlers and pretend to have just received it back from the taxidermist. Mark was estatic! He immediately called the Memphis Commercial Appeal and roadhunters from Knoxville to Southaven lined up to see the big horns. Camera hog Mark got everyone in on the picture taking. Trent saw what was happening and really being a show-off at heart, decided to bring his deer head out so that he could brag too! Here is a picture of the two smart-ass, big-headed show offs together. Not that I am jealous or anything. 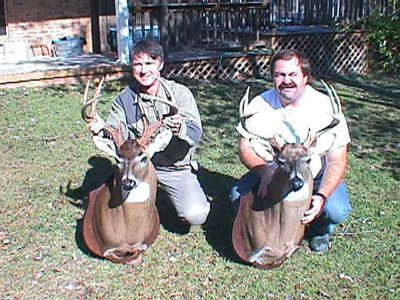