A Funny Thing Happened On the Way to the Hanging Pole 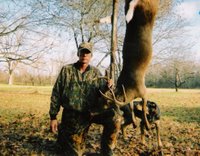 Hysterical Shriek, MS> Paul Howell, well known braggart, crooked lawyer and cheapskate took one look at Rexs' deer and ran for the woods in a sprint. Sheesh! He had taken a nice routine 8-point but Rex had taken the lead with his big deer. HA! He knew where a big one was and he was going to get him come hell or high water.
Paul did not remember what happened with his big seventeen inch buck. His mind conveinently forgot the horrible consequences of the last time he blasted a deer with a muzzle-loader. He also did not remember the curse he had brought on himself with his greedy ways.

He headed to the super buck hole he had found. Going to his stand he did not think anything of the blood red moon lying low over the woods in the early afternoon. Excited and covered with sweat, he climbed in his stand. What a beautiful spot to hunt! Soon, deer were all around him. He did not hear the ominous roll of thunder in the cloudless sky or see the strange lightning rapidly heading his way. 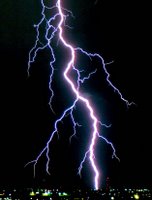 Paul is too good a hunter not to kill a deer, but the giant buck of his dreams had always eluded him. He lost a monster at the Gamewardens Stand and we searched for that thing for two years. He was ready to change things around. Deer filed past, he did not relax. Finally, movement and giant antlers appeared! YES! It was moving toward him! The brush and cane was too thick and he lost sight of it. Deer moved around him, but he focused on seeing the huge buck. A snap of a twig! He looked down. The giant 10-point was standing right under him. Yikes! Too close, buck fever grabbed him! Lightning flashed in the clear sky as Paul shakily cocked his old muzzle-loader. He leveled the scope on the beast, and all he could see was hair as the unsuspecting animal chewed on a whiteoak acorn. He fired! BOOOOOMMM!! Smoke covered everything but he saw the deer hit the ground on it's back. "I GOT YOU" he shrieked!
The deer tried to get up. Uh-Oh! Paul started reloading. The deer got to his feet, Paul drew down for a killing shot! Click! He forgot to put a cap on the smoking gun. DAMN! YIKES! The giant 10-point took off. The lightning faded away and the woods were quiet. To make the story short, we will be looking for that damn thing for the next two years also.
Posted by Editor at 9:36 AM