Rime of the Ancient Deer Hunter

Lost Buck, MS> Paul Howell is absolutely pitiful. Like the tortured ancient mariner he walks around mumbling to himself and buttonholing any stranger he sees to tell him the awful story of how his giant 10-point got away. His wild eyes, trembling hands and disheveled appearance are totally pitiful as he feels compelled to wander the streets of Gulfport as he moans, tells his horrible story and asks everyone if they have seen his deer or have any extra bullets. Pitiful!
Most of the members at the famous Christmas Place avoid direct eye contact with him, in case he starts moaning and weeping about the huge buck. He spends a lot of time just sitting under the hanging pole with a vacant look on his face and an occasional “Woe is Me” “Alas!” and a few bars of Tom Dooley or clanks his muzzle loader against the pole as he softly sings Birmingham Jail. Pitiful ! 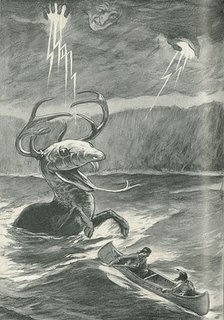 Deer, deer everwhere
And not a bullet to plink
Deer, deer, everywhere
And all the horns did shrink!

His pitiful story has reached epic proportions, the terrifying charge, the giant horns, his historic and brave stand against the giant creature in the face of overwhelming odds.
His poor wife feels so sorry for him that the tears roll down her face as she holds her stomach and rolls on the floor laughing in pity as he wanders the dark halls of their home at night looking for his deer.

The members figure he has the Deer Shanks and avoid him like the plague. He has written long essays reliving the event, and drawn morbid pictures of the deer.

He has tried all sorts of new and unusual equipment to help him with the Deer Shanks. Nothing seems to help and he seems to blame Wandas' laughter for some reason. We figure he is doomed to wander the awful hole area forever. This area is cold, lonesome and perfect for his dumb A@@. We hope so, we’ve got mules to shoot and he is a damn nuisance!
Good-by and Good riddance.

P.S. I just received an email from a man who has taken pity on Paul and has decided to come down to the famous Christmas Place to help out and shoot a trophy buck for Paul. Don't worry he says, the MAIL RIDER is on his way with his little book. He will get a giant buck for YOU.
Posted by Editor at 9:52 AM

I find it strange that after 30 years of hunting the "Mail Rider" aka Brokeback Kid, kills 1 deer and becomes the second coming of Dan'l Boone

Wow. Am I glad that I found your blog. What a treat; I've linked your site in this posting:

BAWAHAHAHAHA Rub it i rub it in..but remember about what is said about hell and paybacks...

the payback is coming in the next article. Stay tuned.
Rex

Unknown said...
This comment has been removed by a blog administrator.
3:56 AM