Sneaking Around, MS> Rex Howell, famous Blogger and Deer Slayer has been having a rough time this year getting his deer. He built a sneaky stand with no luck (so far). He kept returning to the #1 stand because he knew that a big buck was there and it was just a matter of time.
A storm came out of the west and the temps fell below freezing. The last day of the first season was on him. Time for drastic action. He cut work and headed south.
Rex, Denise and Camo got in to camp and had dinner. Later Burney showed up and when he heard Rexs' plan he said " no one has ever killed a deer in the morning there, it's an afternoon stand" Burneys fate was sealed.

That morning it was calm and still and the big 8-point appeared at daylight. BOOM!!! Rex was back at camp before 7AM with the big mammer-jammer. A 225lb. 8-point!!! A giant mule I tell you! Rex takes the lead and retains his Buckmaster status. The members showed up the next day and hit the woods! Rex modestly took a few pictures and did not brag to those LOSERS! here is a picture (or two) of the big 8-point. 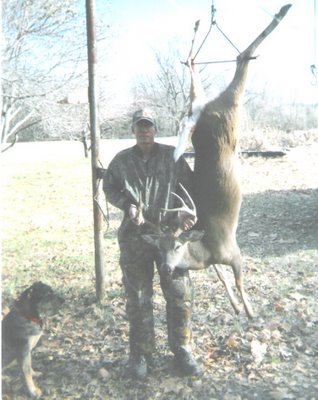 Dad congratulated me and thanked me for being the only decent son he has. 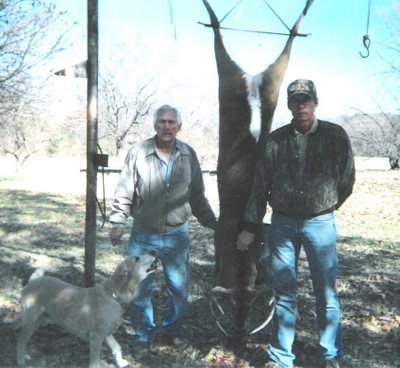 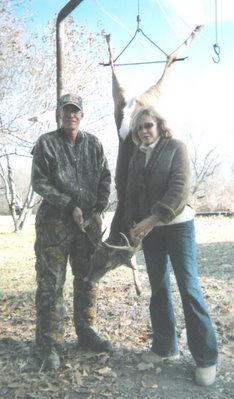 My big and only brother is always in the woods. He didn't get a deer this year; told him he's getting old. Sometimes I think he sits in his stand even when the season is over.

Yes, women love a successful deerhunter (unless they are animal rights activists..) My grandfather hunted, my father and uncles as well. Made for some interesting Thanksgiving feasts!

I think Denise was forced to take that picture. :-o

Now there's a story with a happy ending!
My sons went hunting with their Grandpa for quite a few days and came up empty handed. One of them said, in a sad dismal voice, "pisses me off".
I was the a typical Mother and said, oh honey there's always next season?...
not helpful.

at the 1st crossover stand