How to Grunt a Deer 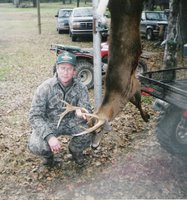 Honkdeer, MS> Paul Howell, notorious game hog, shyster lawyer and blood thirsty outlaw never meets a buck that doesn't grunt nowadays. For 40 years he hunted and never heard one. Now, as a member of the famous Christmas Place Deer Language School he hears them everytime he wanders into the damn woods. It was time to test his newest deer killing device. He was just south of the Crossover Road and sat in his climber waiting on a big buck. The morning was still and he could hear a deer 200 yards away if there was one. He heard nothing. The morning dragged, but his bloodlust was up, and as we know he's greedy, so he reached in his pocket and pulled out his new A-1 Ace Super Duper Grunt Call (with a double reed and a compass in the stock). He held it feeling foolish and looked down the hole in the end. “Oh, hell” he thought “ might as well give it a try”.
He tried to remember the instructions as he made a gentle blow through it. “QUACK!
He looked around. Distantly, he immediately heard a big buck answer! GRUUUNT!
The deer was obviously confused as to why a mallard would be in a pine thicket!
Maybe he was imagining things? He decided to give it another try “QUACCKKK!!!
Nothing, No sound until a low “GRUUUNT” nearer to him. Obviously an insane duck deer was getting closer. Paul got ready. Nothing. He waited and waited. One more try. His best try produced a rusty “QUACKUUUNT” The crazy deer sprang out of the woods heading straight for him looking for the duck. BOOM! The 7 Mag. Roared and the deer dropped in its’ tracks. The big nine point for some reason tasted like chicken or maybe roast duck.
Trent is still furiously looking through the rule book about shooting a deer while impersonating a duck with no success. Now you know how to grunt up a big old buck. (Tip: Blind Fool Luck)
Posted by Editor at 11:37 PM

Hello, Neat post. There is an issue along with your website in internet explorer, may check this?
Best Deer Grunt Call