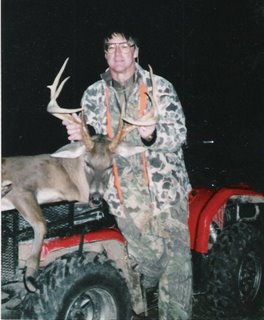 OldAge, MS> He had suffered a long hard season and Trent wasn’t getting any younger. Everyone in camp had blasted at least one nice buck except for Trent. The damn laughing and jeering when he went out to his stand was more than he could take. He returned over and over empty handed. To top it off his fiftieth (50) birthday was approaching like a whirlwind.He dropped into the grump mode (which wasn’t much of a stretch). Plans for a big party (nix)presents and a nice dinner out (nix) a hot time and a little oh-la-la (nix) (nix) (nix). The season was coming down to the last weekend and he planned to hunt everyday until he got his deer, birthday or no birthday! He hunted hard that weekend but no deer for the grumpy aging shyster. The last day of the season and his birthday was upon him January 22. His wife Shelley (martyr) agreed to go with him to camp as he made his last gasp effort to kill a deer.
Trent had moved down to the edge of the cottonfield because Mark had seen a big buck crossing it a few weeks ago. He hoped that the deer would filter out of the hills that afternoon and the buck would reappear. The day grew long and only a few deer had shown. The sun was setting and only a few minutes remained before it would be too dark to shoot.
The feeling of a lost season churned in his stomach. Way across the field a giant set of antlers moved his way. He moved his field glasses up and checked “Whoa, Nellie!” The big deer ambled toward him but the angle might be too far. Trent took a rest and in the fading last minute of light laid the crosshairs on the buck at 200 yards. BLAM! the rifle roared and the huge buck collapsed. The huge deer was taken in the last second of the last minute of daylight on the last day of the gun season. It was dark when he found the deer. He went back to camp with a whole new attitude. He met his wife at the door with a strange gleam in his eye. What a birthday to remember!
Posted by Editor at 10:08 PM