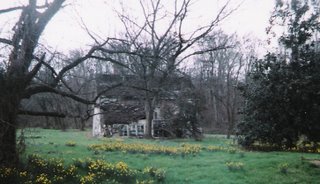 Gingerbread, MS> On the grounds of the eerie and desolate Christmas Place Hunting Grounds is an old home, rotted and abandoned, that for years has only been known as the Witchs’ House to all the local inhabitants of the delta marshes.
After having my hunting interrupted to file report after report on missing hunters, the area around this terrifying place was placed off limits to all hunting. The children at the club swear that if you go by it at night, you can hear strange chanting and the flickering of lights inside. Sometimes a horrible scream rends into the darkness, or horrible weeping and moaning can be heard. My research into the annals of the Christmas Place reveal that it was the original home of THE WITCH OF YAZOO. This horrible witch captured, killed and ate many people who traveled the road to Yazoo City until an angry mob killed her by drowning in the pond across the road from the home. Before she died, she cursed Yazoo City (which very promptly burned to the ground) She also said that her spirit would haunt the land and return to taste the flesh of any man, woman, or child that came near the house at the full of the moon.
She said “they taste like chicken”
Most members here have found that a good threat to throw an unruly child through a dark window of the house can do wonders for their attitude.
So, all guest or visitors, beware of the Witchs’ House
PS: Trent does Last Will and Testaments , $65 while you wait.
Posted by Editor at 2:20 PM