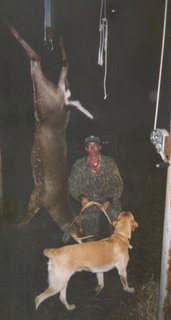 Thornyhorns, MS> Rex Howell, well known Buckmaster of the famous Christmas Place Giant Buck Club recounts another of the large bucks he has taken off the club in an exclusive interview with The Bodock Times.
Rex Howell (Lord of the Buck) sat quietly at the Dove Field when he felt the rumble in the ground. The earth shook as the mighty and terrible buck emerged. It shook its’ huge antlers, knocking over trees and began harassing the field of spellbound does. The Buckmaster sat quietly, even as the afternoon sun shining on the massive antlers almost blinded him. He waited, the moment came, and Rex calmly placed the bullet in the vital area and claimed another trophy. Rex made his dad load the 191/2 inch spread monster who only said “You’ve got a problem” as they headed to camp to spread warmth and cheer with his swell friends at the happy and comradely Christmas Place . This was Rexs’ third and biggest deer of the year, while the poor losers of the club hadn’t killed jack crap. Rex rushed into the camp and yelled :”I killed a giant moose at the Dove Field!” Everyone froze. It grew quiet as they stared at him. A cricket chirped loudly, a bee buzzed by. He shouted “Did you not hear me? I killed the biggest deer in nine counties at the Dove Field!" Absolute stunned silence followed. Rex yelled “Come look at his giant antlers!” No one moved, Not a sound. Then like a dam bursting someone screamed “Grab Him! Get a Rope!” and an angry mob attacked him. The unassuming Buckmaster escaped with his life still not understanding what had set the poor deluded fools off, but decided that he would retire from deer hunting for the rest of the year.
Posted by Editor at 11:20 AM